The Honor To Be the First 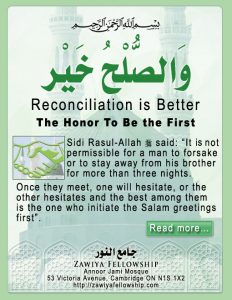 The Messenger of Allah سبحانه وتعالى Sidi Rasul-Allah صلى الله عليه وسلم said: “It is not permissible for a man to forsake or to stay away from his brother for more than three nights. Once they meet, one will hesitate, or the other hesitates and the best among them is the one who initiate the Salam greetings first”.

It is narrated that some people tried to cause friction between the children of Sayyidina Ali رضي الله عنه. Someone came to Sayyidina Muhammad bin Ali bin Al-Hanafiya and said to him: “How is it that your father puts you through extreme dangerous situations and hardships and he does not do that to your brothers Al-Hassan and Al-Hussain”?

Sayyidina Muhammad bin Ali bin Al-Hanafiya رضي الله عنه replied: “This is because my two brothers are the jewel eyes of my father, and I am his hands, therefore, he protects his eyes with his hands”.

On this subject, there was once a disagreement on a specific issue between Sayyidina Muhammad bin Ali رضي الله عنه  and his brother Sayyidina Al-Hussain bin Ali Radhia-Allahu ‘Anhuma (رضي الله عنه ), and because of a difference in opinion between them, they stayed away from each other for a couple of days.

Sayyidina Muhammad bin Ali bin Al-Hanafiya رضي الله عنه  was as most pious as his brothers, always aware of Allah سبحانه وتعالى as well and he was extremely devoted to his devotion, therefore, he wrote to his brother Al-Hussain Radhia-Allahu Anhuma (may Allah be pleased with them both) a letter saying:

In the Name of the Divine Sovereign Lord, Allah SwT, the Most Merciful and Compassionate (Bismillahi Rahmaani Raheem – بسم الله الرحمن الرحيم).

You rank in a station of Honor I can never reach and exaltedness I can never meet. Once you read this letter of mine, then put on your slippers and walk to me to make peace with me, and be careful not to let me be the first to come and forfeit this honor and blessing from you, for you will always hold the higher rank than me. Peace” (WasSalaam).

They both met half way through, and they embraced each other, cried and reconciled their difference in opinion.