The Grace And Splendor of Sidi Aqil Al-Manbiji

In the Name of Allah the Merciful and Compassionate

About the Shaykh Sidi Aqil Al-Manbiji

Book in Arabic and English 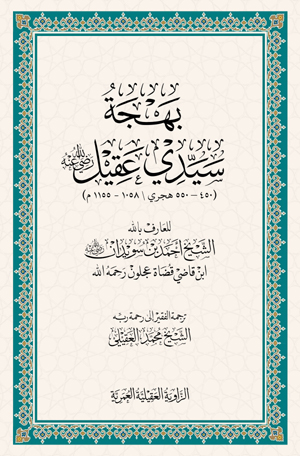 Here is a summary of the lineage of Shaykh Al-Qutb, whose outgoing authority remains in this life, and after death, may Allah sanctify his soul and fill his resting place with light.

He is Shaykh Aqil Al-Omary Al-Manbiji (450–550 Hijri / 1058–1155 C.E.), descendent of Zainu-Deen Sidi Abdullah bin Omar Bin Al-Khattab, may Allah always be pleased with them all, born around 450 Hijri / 1058 C.E. referred to as Manbiji since he resided in the town of Manbij near the City of Aleppo in Syria for some forty-nine years.

Many well-known Mashayikh of the time studied under Sidi Aqil Al-Manbiji. Shaykh ‘Adī bin Musãfir, Shaykh Ya’qoob al-Ja’bari, Shaykh Musa bin Mãheen Al-Mardeeni, Shaykh Musa Al-Zooli, and Shaykh Yusuf bin Ali Al-Manbiji are among forty renowned Mashayikh of the time as stated in the book of Al-Arif Billah Sidi Ahmad bin Swaidãn titled “Bahjat Sidi Aqil”, the subject of this book. Imam Al-Sha’rani stated that Shaykh Aqil Al-Manbiji was the Leading Shaykh of his time, and he was the first to introduce the Khirqa Al-Omariyya (based on the traditions of Sidi Omar Bin Al-Khattab [t]) to Syria, a country renowned then as “Shãm”.

Shaykh Aqil was a most blessed Shaykh, a famous guardian of the truth who enjoyed sincere breaths, eminent devotion, effulgent lights, high rank, exalted virtues, great talents, a high station in supporting realities, a lofty status, beautiful interpretation of Qur’anic verses and Prophetic sayings, an exalted rank among the forerunners, and he was one of the pillars of those who attained acceptance and nearness to their Lord.

Shaykh Aqil [t] may Allah be pleased with him, also was among the eminent scholars and cornerstones of the notable elites, and he remains one of the four about whom Shaykh Abu al-Hasan al-Qurashi said: “Four of the shaykhs have the Executive Authority in their graves as pertaining to the manners of the living, Shaykh Maarouf Al-Karkhi, Shaykh Abdul Qadir Al-Gilani, Shaykh Aqil Al-Manbiji, and Shaykh Hayãt Bin Qays Al-Harrãni.”

Shaykh Aqil, may Allah be pleased with him, became the Shaykh of the Al-Aqiliyya Al-Omariyya Tareeqa because of his extensive knowledge, spiritual attainments, ascetic detachment, and respect he enjoyed among the Awliya of the time.

A large group of people and many of the seekers of his company and devotees who were blessed to be his disciples progressed on the spiritual path with his teachings. More people reached high ranks, and shaykhs, scholars, and others referred to him with great respect for his status.

Sidi Aqil Al-Manbiji resided in the City of Manbij for forty-nine years and passed in the year 555 Hijri.