Feats of the Virtues of Qutb Wali

Book in Arabic and English 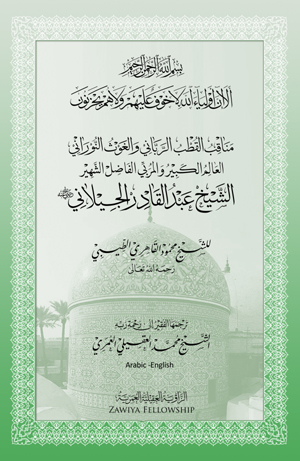 Here we begin by celebrating the Sovereign Divinity of the Lord of all creations, Allah the Most Supreme and Magnificent, the Merciful and Compassionate Lord of Divine Grace, and following the assertion of the Divine Grace of citing Allah’s Regards and Blessings of His Mala’ika-Angels upon the Seal of Prophets and Messengers, Muhammad (r) – upon whom be peace –, and continued everlasting blessings upon him and upon his family and companions.

Indeed, Allah [U] has dedicated men to His worship, (للهِ رِجَالٌ), He chooses them from among the most pure and elite of His devout servants, He honors them with the crown of knowing Him, He adorns them with the cloak of His guidance, guardianship, and protection, He nurtures their hearts with the balsam of His love and acquaints them with cognizance of His Absolute Oneness and uniqueness, and indeed, all praises are due to Allah, Lord, Creator, and Cherisher of all creations.

As Allah (U) supports the entire creations throughout the eighteen-thousand universes with their unique and particular needs, our Lord, Allah (U) also supports His Prophets and Messengers with miraculous testimonies as proofs of their truthfulness, and at other times as means to serve particular necessities, all of which are part of the ongoing proclamation of His Divinity and Lordship.

Miracles of the Prophets (معجزات الأنبياء عليهم السلام)  – upon all of them be Peace – are in most cases a response to a challenge of the  people they are sent to, question, doubt or refuse to comply with the Divine guidance, and they are general and must be known. As to the Divine support of His deputies (كرامات الأولياء رضي الله عنهم) – may Allah bless them and be pleased with them – whatever unusual, uncommon feat of virtues that take place at their hand, they are isolated and are intended to serve a particular case to remain a proof of being under the Divine guidance and support, all of which are in support of the Divine proclamation that there is no power or will except by Holy Omnipresent Lord of Divine Grace, Allah, the Most Supreme and Magnificent (لا حول ولا قوة إلا بالله العلي العظيم).

Prayers in themselves are miracles that connect the servant to his Lord. Only Allah (U) may answer the prayers of any person, a believer or a denier of the truth; young or old, male or female, for all creation depend absolutely on the sole Holy Creator for their needs in this life and in the next, and no one except He has the power or the resources to satisfy all needs with His compassion and as He pleases. Furthermore, even each and every basic common function, personal, global or universal are all signs of Divine Grace whether anyone is aware of them or not.

Feats of the virtues of true devout servants of the Lord (U), (Awliya –(أولياء  are marks of Divine honor for them for their purity, trueness and devotion called in Arabic “Karãma – (كرامة).”

Among the most renowned devout worshipers (رِجَالُ اللهِ) is Waliyyullah (وَلَيُّ اللهِ) Shaykh Muhyiddeen Abdul-Qãdir Gilani (t), may Allah bless his soul and be forever pleased with him (1077-1166 C.E. / 470-561 Hijri). Shaykh Abdul-Qãdir (t) is a most renowned luminary whose enormous spiritual attainments and contributions to Islamic mastery are well recognized by Muslim scholars worldwide. He is a leading sire among Allah’s deputies (Awliya), as well as he is the Qutb of Gnosis, the role model and Imam of Gnostics of all times. Allah made them safety for the people and the land for all times. Allah’s deputies are marked by grace and good manners following the exceptionally perfect character of Allah’s Messenger (Rasulillah – r), men who live their covenant with him with truthfulness and sincerity and who are his deputies through times, starting with the beginning of prophethood till the conclusion of deputyship on this planet. Their life is a mirror of his character, a proof of the truth and validity of his mission, and an extension of its everlasting continuity.

Shaykh Abdul Qãdir’s (t) ancestral lineage goes back to Abdullah son of Al-Hassan bin Al-Hassan bin Ali bin Abi Tãlib, may Allah be pleased with all of them, and all are from the blessed family of Allah’s Messenger (r) upon whom be peace.

Herein, it is noteworthy to state that uncommon signs of Divine Support and Grace were also experienced by the blessed companions of Sidi Rasulillah (r) including his vicegerents Abu Bakr, Omar, Othman, and Ali (y) among others which feats may have surpassed all the signs of special Divine Grace Allah’s righteous deputies (y) enjoyed, a few of which were shared by their present witnesses, and countless “karãmat” (كرامات) were kept private between the servant and his Lord (U) in support of their faith and as the sweet nectar of Divine Love.

It is surely Allah’s Will that these few extraordinary feats of Divine Grace became public for centuries as a sign of Allah’s special favors and support for His deputies, and by Allah’s Grace and help, here I felt the need to translate some of them to English to share the grace, so perhaps they may nourish the faith in our local community here among others.

Thanking my Lord Allah (U) the Most Supreme and Gracious for His guidance and help, here we begin the recital.